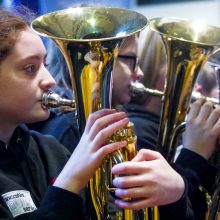 Two of our Music Centres get together to celebrate their work this year with performances from young musicians aged from 9 to 16. Ensembles such as string groups and a ukulele ensemble will be playing pieces including The Great Escape and music from Lion King, there’ll be a number of solo performances, and the concert will end with all the performers joining force for a musical extravaganza!

The concert will be raising money for the Edward Dee Fund which raises awareness of meningitis and sepsis.