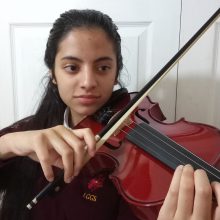 At the end of the summer term we were thrilled to hear from our string teacher, Mr Boyes, that one of his violin students, Radhika, who he’d continued teaching online throughout the pandemic, had not only passed her ABRSM Grade 6 exam, but been awarded a distinction. Distinctions are awarded to candidates awarded 86% or higher and it’s a fantastic achievement.

We were interested to find out more about Radhika and her musical journey – we hope what she has to say inspires  you as much as it inspired us!

How long have you been playing the violin and what inspired you to start?

I started playing about 8 years ago. My dad thought that it would be good for me to learn an instrument, so he just asked me one day which instrument I would like to play, and I picked the violin. I don’t really know why I picked it, but I ended up really enjoying it which was great.

What styles of music do you play?

I play Western Classical music as well as the Hindustani style of Indian classical music. I find both of them to be very beautiful styles and I love the pieces I have gotten to play. They are vastly different – even the violin itself is held differently so I wouldn’t say there is much of a crossover between them, but certain aspects of learning both have helped me with the other. For example, there is a lot of ornamentation in the Hindustani style, which made playing ornaments and slides in Western classical (and also while playing Latin American music like tangos) much easier. Similarly, because there is a lot of sliding up and down the strings in Hindustani violin, it really helped me once I started playing in higher positions on the violin in Western Classical, as I achieved a better understanding of where exactly the notes were, so I was able to find them much more easily.

Do you play with any bands and ensembles?

Not currently, but I used to play in my school’s orchestra for a few months, as well as the music service string orchestra while I was still in primary school. I loved the supportive community in both cases and the opportunity to learn tips from other musicians. I felt that playing in an ensemble, especially in a larger group, was very different from simply playing solo music because it forces you to keep going through the piece and coordinate with several other people rather than just performing in your own style and pace. Also, it helped me build on several other skills that I hadn’t needed before then, such as learning different types of bow strokes, changing time signature, key signature, and position very quickly, but most of all it improved my sight reading and my understanding of the score! I have countless memories of being lost during a piece (not just me, usually the people around me as well which made it more hilarious), especially when I first joined, but the satisfaction when you are finally able to keep track and make it through is unbeatable!

Tell us about your exam went and how you felt when you got your result?

I feel like my exam actually went by quite quickly, and it was surprisingly pleasant. I had expected it to be more of a tense situation than it was, but both my pianist Mr Cookson and the examiner were really nice, which made it a lot more comfortable, and as enjoyable as an exam can be. At the time I didn’t think it had gone amazingly – though I tried my best, it didn’t feel like it was the best I had ever played and I knew I had definitely made a few mistakes, but I was just too relieved after it was over to worry about it anymore. When I finally got the results, I was in a bit of a daze because it was quite unexpected, but I felt so incredibly excited and grateful!

Do you think taking exams is important?

Not necessarily, I feel like the exams mainly give you more of a goal to work towards, which can help drive and measure your progress. However, I think it would be equally possible to learn by going through the exam curriculum without actually giving the exams, or even move away from that altogether, as long as you have a teacher that can guide you in the right direction. One benefit of the exams is that it does put you in a more high-pressure environment, which teaches you how to control your nerves to be able to perform, and to be under greater scrutiny, which would be helpful to anyone wishing to participate in competitions. I would also say that even if someone doesn’t wish to take the exams, it is important not to neglect the other aspects besides performing pieces, such as playing scales, sight-reading, general music theory etc. because they do improve overall musical ability.

Learning online has been a fun and interesting experience. There are obviously a few issues – for example the sound quality online really can’t compare to what it sounds like in real life – but considering the state of the world right now, it’s more than enough that I was still able to have lessons in some form every week, and overall online learning has been a very effective substitute. My teacher, Mr Boyes, has been incredibly supportive, and managed to teach me and help me improve despite the technical difficulties. Thankfully I didn’t have to take my exam online though, and I know I won’t be missing online lessons once we are able to go back to lessons in person!

What are your musical ambitions for the future?

Honestly, I haven’t really thought much about what’s ahead. I am pretty certain that I will at least finish grade 8, and I plan on keeping on playing the violin at least as a hobby in the future – I don’t necessarily think I will end up playing professionally. For now, I am just focusing on learning more and improving as much as I can.

Why should you learn an instrument and what advice would you give someone just starting out?

I think learning an instrument is just an incredibly rewarding experience, in so many ways. It can be a great outlet to take your mind off of school or work and just apply yourself to a skill for yourself, at your own pace. Also, music has a huge range of styles and instruments to choose from, so there really is something for everyone to enjoy. To anyone who’s just starting out I would say, absolutely just have fun with it. It is probably going to be quite tough at the beginning, but if you just stick with it and practice when your teacher tells you to, you’ll improve in no time, and it won’t be long before you get to play the coolest songs.