LYJO at Crowning of the Rose Queen Festival 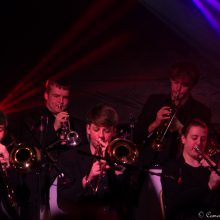 LYJO will be performing at this years 125th anniversary of our Crowning of the Rose Queen Festival at Lytham Hall.
The band will be be performing a concert of swing to pop music in big band style, including the jazz version of Bohemian Rhapsody, from 4.30pm on an outdoor stage to an audience of over 3000!
The LYJO concert is the highlight of an afternoon and evening full of live music entertainment! After LYJO’s performance there is a traditional ceilidh band of four very talented folk musicians and rounding off the night there is a 5-piece covers band.
Festival Co-ordinator Barnaby Dickinson said:
“LYJO were invited to play at Lytham Club Day, the biggest of all the Club Days on the Fylde coast, after I saw LSJO play at the ‘Concert for Edward’ early this year, I was bowled over with the talent and the show they put on. Truly excellent! I’m greatly looking forward to LYJO wowing our audience in June”.

Check out this guitar tutorial video from @LancsMusic which talks and plays through three easy guitar pieces using only two strings. This is for guitar players with some knowledge of notes and strings. This helps build confidence in playing songs.
www.youtube.com/watch?v=LQ57Qo2BGbE ... See MoreSee Less

There is still time to sign up for our Lancashire online Youth Folk Sampler Day, for young musicians aged 12-18, run together with the National Youth Folk Ensemble, taking place online on Thursday 28 May...

Play by ear and develop your creativity, explore folk music, and learn from inspiring professional musicians. Take part in a day of creative folk music workshops with other young musicians and, if you...
View on Facebook
·Share