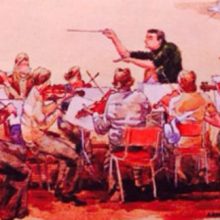 A concert by alumni of the Lancashire Schools’ Symphony Orchestra in celebration of the life of their former conductor, Malcolm Doley, who passed away in Autumn 2019.

Everyone in the orchestra was a member of the Lancashire Schools’ Symphony Orchestra between 1972 and 1995. There are players returning from as far afield as Sydney, Australia, the United States, and Denmark, as well as the far corners of the British Isles, and many won’t have seen each other for up to 40 years before meeting up for this weekend’s reunion, rehearsal and concert.

Some alumni have gone on to play with professional orchestras such as the Royal Liverpool Philharmonic Orchestra and the BBC Symphony Orchestra, some have passed on their expertise to the next generations through teaching, many former members have continued to play as keen amateurs , and there are perhaps one or two players who have had to search for their instruments in the attic and scrape years of dust off!

Conducting will be Stephen Bell who played French Horn in the Orchestra from 1977-1980 and is now a highly respected conductor, appointed Associate Conductor of the Halle Orchestra in 2013, and Principal Guest Conductor of the RTE concert Orchestra (Dublin). As well as frequent festival performances , including the BBC Proms, he also appears as guest conductor with many orchestras such as Royal Philharmonic , Orchestre National De Lyon, and the Royal Scottish National Orchestra.

The concert is free to under 18s (accompanied by and adult) and proceeds will be donated to the Friends of Lancashire County Ensembles (Charity No. 1181507) to help support young musicians in Lancashire.