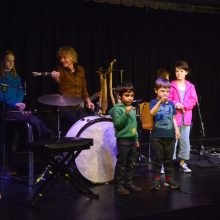 “I liket the myoozic and the tip of myoozic that it was and all of it to the end and from the beginning to the end.”

In October 2019 the international jazz project Cinclus Cinclus had a week long residency at More Music in Morecambe. 1225 children from 7 different primary schools in Morecambe and Lancaster engaged in a highly interactive music project that took most children and teachers by surprise.

This method developed by Isungset, Bugge and Robinson seems to enable children with no previous experience in improvisation and music making to explore musicianship and creative learning in a highly engaging way. With no verbal communication the musicians invited the children to be part of their orchestra using their voices, their bodies and playing instruments on stage.

The main source of musical interaction came from nature objects like stones and sticks becoming instruments. These objects are easy to play and put into a musical framework of riffs and grooves they offer an opportunity for a child to explore what it is like to be a musician.  Feedback from parents also seem to suggest that the concert inspired the children to continue this free exploration of music making at home picking up objects with no previous musical value and exploring what they could do.

Essentially the method is grounded in a deep level of trust and curiosity for the musical value already inherent in children. Drummer Terje Isungset reflects on why this method of working with children still inspires him after 30 years and more then 3000 concerts for young people in Norway. “I think all children are a genius and that all children’s energy is positive. It is our job as musicians and teachers to find the right way to channel this energy.”

The projects residency at More Music showed endless examples of how music and improvisation with no spoken words can engage and channel positive energy. It also presented the children with a new genre of music and seem to equip them with the ability to explain what that is. Mrs. Linda Pye, Headteacher at Ryelands primary school says: Following the concert I asked the children ‘So what is jazz?’. I was staggered by their insightful responses, showing a real understanding for a genre that they previously had no knowledge of.”

Following the performances, a seriers of workshops took place in the schools ensuring those special “one-off” moments did not just exist as such, but instead were fully artistically explored. This also gave the children a unique opportunity to experience live music in their classroom.

Following up on feedback from teachers and children, Maja Bugge and More Music are now working on developing this method further with performances and workshops for children, musicians and teachers in 2020.