LYBB Blog about their tour to Ayrshire… 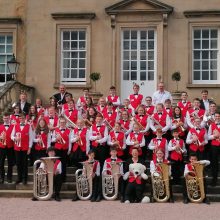 There was much excitement as the LYBB band gathered at the Woodland Centre to start loading the coach and van to kick start the tour. After many months of planning, fund raising and preparations, we were finally on our way to Scotland!

Day 1 and the team set off for Culzean Castle. The young players from Dalmellington Brass Academy were waiting for us when the coach arrived. They had been looking forward to meeting LYBB, and we were very pleased to be joined by Luke (soprano cornet) Rebecca and Wendy (cornets) and Sarah (trombone) who were boosting our ranks, as a few of our players had not been able to come on tour due to exams.

Dalmellington Brass Academy played a 15-minute set first, and had brought a good number of supporters with them. Quite a crowd gathered to listen, despite the rain! Thankfully it eased off ever so slightly just at the point where we were putting both bands together for a joint performance. Not everyone could fit under the gazebos! It was quite moving to hear both bands playing together; LYBB performed Alan Fernie’s “Prismatic Light”, the hymn tune “Aurelia” and another Alan Fernie piece “African Funk”. We were grateful to Dalmellington Band for bringing clothes pegs to stop the music blowing away.

LYBB played next and we opened with “Blaze Away”, followed by “Pirates of the Caribbean”. Jack then gave a very creditable first performance of his solo, “Share my Yoke” and everyone enjoyed “Those Magnificent Men in their Flying Machines”. Meanwhile the rain poured down, and the players on the end chairs got a bit wet. Rain gathered overhead in the roof of the gazebo, and eventually cascaded down on Helen’s head, which was met with much hilarity!

We finished the programme off with Andy Duncan’s arrangement of “Loch Lomond” which was to become the signature tune of the tour. Eventually we got everyone back on the coach and headed back to Gowanbank for our early evening meal, quick change around and back on the coach heading for St Nicholas Church, Prestwick.

The concert got off to a fine start with “Prismatic Light”, there were excellent solos from Olivia and Eleanor, and the first half finished with a great rendition of “Bohemian Rhapsody”. The second half opened with Eric Ball’s march “Star Lake”, followed by a selection of film music, “The Greatest Showman”. Jasmine gave a really good performance of “Teddy Bears Picnic”, displaying much humour and character, and George thankfully got to play his xylophone solo “On the Track”, which went down very well, and for which he was awarded Brassy Bear. “Loch Lomond” had the audience clapping along, and the finale “Music” was very moving. The concert raised over £350 for Ayrshire Cancer Support!

Day 2 started off a bit brighter and first stop was New Cumnock Swimming Pool where the youngsters had a great time playing around on floats and having a laugh. The next venue was Dumfries House for our afternoon concert which had beautiful performance area. The audience were packed in; they have frequent Sunday afternoon concerts, and a regular crowd who attend every time. Admission was free, with a collection for the Marie Curie charity. The band played exceptionally well. It was a similar programme to our first evening concert, and once again the soloists Olivia, Eleanor, Jasmine and George were fantastic. “Loch Lomond” should have been the last piece, but a standing ovation prompted an encore, and we gave them “Music”.

After this concert we decided to make the most of the sunshine, and took the coach down to Ayr Beach, where we parked up for half an hour to let the players have some time on the park at the sea front. It was nice to get a good blast of sea air, and a few bought ice creams.

Our next stop was Ayr Salvation Army Church, where we were warmly welcomed by Bobby Irvine, Ralph Riddiough, Andrew Irvine and the rest of their team.  The first half began at 6.30pm with an explosive rendition of “Prismatic Light”, followed by “Blaze Away”. This time it was Jack’s turn to play “Share my Yoke”, and it was excellent, as was Eleanor’s “Concierto de Aranjuez”. We were joined by the Ayr Salvation Army Young Peoples’ Band, who performed for 10 minutes at the end of the first half. They sounded really great!

The second half opened with “The Greatest Showman”, we had solos from Jasmine and George, and a beautifully controlled rendition of Peter Graham’s “Hine e Hine”. We enjoyed listening to the Salvation Army Young Peoples’ Band again, and the concert finale was a massed band performance of the Salvation Army march “Star Lake” by Eric Ball, and Alan Fernie’s “African Funk, conducted by Andrew Irvine. The concert raised £300 for the Salvation Army Big Collection, which supports people who are marginalised and vulnerable across the UK.

Day 3 was a non-playing day, and an opportunity for team building and fun at the Galloway Activity Centre. The sun was shining, perfect weather for outdoor activities. On arrival we quickly divided into 2 teams. One team went to do Laser Tag, while the other were kitted out with wetsuits and life jackets, then taken down to the loch for Raft Building, which sank within a couple of minutes amid roars of laughter, and everyone had a swim afterwards.

We were joined by around 40 young Ayrshire brass players. The workshop day started with the march “Loyal and True”, which sounded quite splendid after 20 minutes of rehearsal. We then divided up and went for an hour of sectional rehearsals with Ayrshire and Lancashire instrument specific tutors, to work on Peter Graham’s exciting work “Alloway Tales” before lunch.

Lunchtime saw the arrival of Archie Hutchison, MD of Dalmellington Band, who was delighted to sit and observe the afternoon rehearsals, and was very complimentary about the potential of the young players. Gary Williams, one of the South Ayrshire brass tutors rehearsed “Alloway Tales” in some detail, then Helen took the massed band through “Loch Lomond”. At 3pm there was a short concert for parents and families.

The players sang all the way back to Chorley. We had Bohemian Rhapsody and many karaoke party songs at the top of their voices!

Thank you to all the people who have supported our tour and made it possible.

It has been a most enjoyable and memorable tour, with a great show of team spirit, from the planning stages right through to the tour itself. Thank you to all the players and parents for making it so special and enjoyable.

A big thank you to our sponsors for their generosity, which helped to bring the cost of the tour down to an affordable price for parents; Ribble Vets, Vamooz, ADB Safegate, Ultra Electronics and the School Uniform Company.

Last but not least, thank you to the wonderful team of tutors, Gary Fox, Jay Hall and Neil Raisbeck who all worked so hard to look after the players, keeping them safe, and being there to support them 24/7 throughout the tour, and to Steve Minshall for his fantastic support too, particularly with the organisation of equipment and stage setting. What a team! 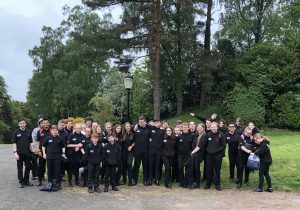 Following the decision to effectively close schools from Monday 23 March, all individual, small group and large group teaching will be suspended after Friday 20 March for the foreseeable future. We have also cancelled our out of school activities including Music Centres, County Ensembles, workshops, concerts and events until at least Monday 20 April. All parents and students have been contacted. Instrument deliveries, repairs and replacements will also be suspended.

We are continuing to explore ways we can best support our young musicians and any schools which remain open during this period. Please look out for further announcements.

Thank you for your continued support. ... See MoreSee Less

Message from Tim Rogers, Head of Service Re Cornavirus

Following the advice and guidance from Government and Public Health officials, we are very sorry to announce we have taken the decision to suspend all out of school activity including Music Centres, County Ensembles, workshops, concerts and events until Monday 20 April. All parents and students have been contacted.

Instrument deliveries, repairs and replacements will also be suspended. Teaching in schools will continue as far as possible as long as schools remain open. We will continue to monitor the situation and please look out for further announcements.

Thank you for your continued support. ... See MoreSee Less